Qualified immunity, And Other Legal Doctrines That Deny Justice When Civil Rights Are Violated

Qualified Immunity (QI) and its derivatives are problematic, and the key to judicial reform required to restore Constitutional civil rights.

Some want to completely eliminate qualified immunity because it has been applied illegitimately to absolve (mainly) police officers of liability for reprehensible conduct. Those who are protected from responsibility for their conduct even when that conduct is an outrageous violation of the civil rights of a citizen naturally want to keep the special protection they have.

However, it is as much error for citizens to push for complete elimination of qualified immunity, as it is error for our federal judges to use that judicial doctrine to absolve all liability for what everyone knows are clear, intentional and purposeful violations of civil rights.

Yes, QI needs to exist, but its practical application must be limited. And everyone has known this for some time. 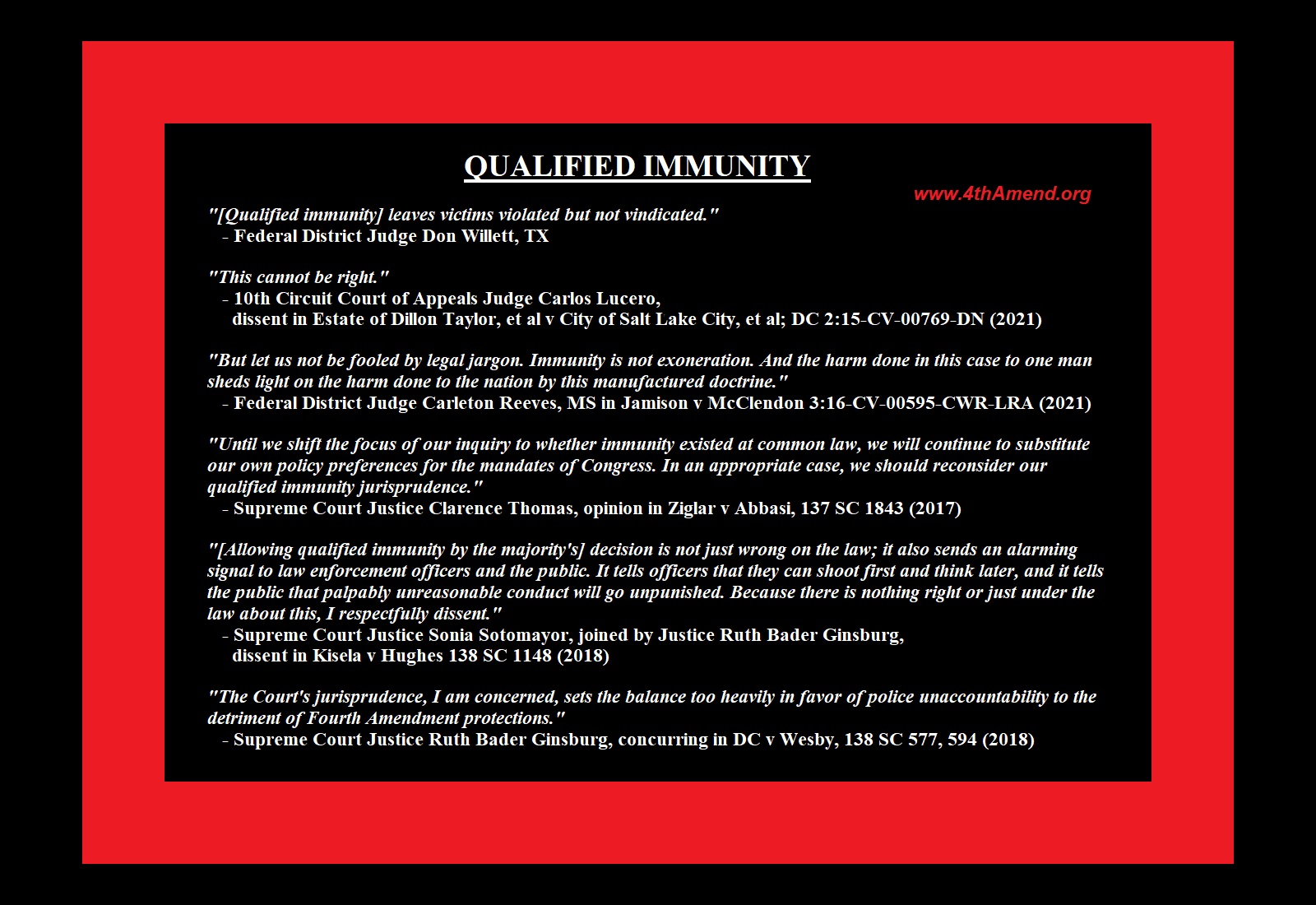 Good officers who respect civil rights don't need QI to do the job. Lawful conduct in stopping crimes and keeping communities safe does not violate civil rights. And that is what the majority of our officers do every day.

There are exceptions. And when those exceptions violate civil rights, most are aware that officers are rarely held liable for civil rights violations by our courts, often because judges allow that officers nearly always have "qualified immunity" from liability. In an era where everyone can see the videos, and rights violations are painfully obvious, that notion seems to seriously fail the American people.

The Constitutional civil rights that the Federal courts exist to protect stem from the US Constitution, the highest law of the land. Nothing supersedes it. No law, and no court ruling can take priority over the Constitution, or diminish the rights enshrined there. That is where we started.

In 1804 in Little v Barreme, Justice John Marshall said (of civil rights violations), "A violation is a violation...and (when rights are violated) restitution is due..." He was weighing the matter before him in the scales of justice, and he focused on the perspective of the violated. He wrote that he struggled as he considered the perspective of the naval officer "following orders" and observed that officers are expected to follow orders. However, a violation had occurred, someone was harmed, and the damaged party must be made whole. The rights violator was before him, so the violator was held liable.

Through most of American history, our courts held that view.

In 1967 the Supreme Court (SCOTUS) ruled in Pierson v Ray in 1967, that police officers were merely "acting lawfully...in good faith reliance upon a (local, anti-loitering) law" when they arrested ministers protesting the civil rights violations of that era, and that the officers had "qualified immunity" from liability for the rights violations. The court was worried that officers might be hesitant to do the job if they had to make decisions between [a] doing nothing, and [b] enforcing a law that might put them in position to risk being financially decimated to personally make restitution for damage a rights violation can inflict. So the officers were granted a new creation: "qualified immunity".

That QI notion has expanded over time ("reasonable person", "clearly established law", "clear precedent", even to the point that "no allegation of malice need be alleged or proved", etc.; see the "Relevant Laws" page). Today, QI absolves officers of liability in nearly every conceivable situation. And SCOTUS has recently even said 'it is not necessary to determine if rights were violated, first focus on whether the officer (or other government official) accused of a civil rights violation can be absolved of liability.'

It is grave error for SCOTUS to say to citizens, "Your civil rights were violated, the Constitution was violated, but you shall have no restitution for the damages inflicted upon you." Especially true in the era of abundant video...

SCOTUS error is laid bare when it tries to justify the lack of justice with manipulations of language like "it's only a violation of civil rights if a reasonable person/officer would have known it was a violation". That denies that officers were trained specifically in the law at a sanctioned law enforcement training academy...after being selected and vetted from among a pool of applicants...and officers using police powers on citizens must be required to demonstrate some level of proficiency in the law in order to graduate from that law enforcement training academy. How else could officers enforce any law?! And "reasonable officers" might include every high school student who studies "US Government" and learned what the Bill of Rights is. So, every "reasonable officer" always knows, and must respect, the Bill of Rights.

SCOTUS has certainly lost sight of its job of upholding and protecting the rights of citizens enshrined in the Constitution.

There are some cases where "officers are just doing the job, following orders" at the direction of superiors or department, or "relying in good faith upon a law", and actions of officers violate civil rights. In Pierson v Ray "qualified immunity" was created to shield officers from liability for violations that were not their fault. The Breonna Taylor (Louisville, KY, 2020) and Amir Locke (Minneapolis, MN, Feb 2022) cases are examples. Officers were told to serve a warrant, and the officers followed department procedures in serving that warrant. Officers returned fire when fired upon (Taylor) and shot wen they saw a weapon being drawn (Locke). Officers did what officers do. Granted, the civil rights violations that caused Ms. Taylor's tragic death and Mr. Locke's tragic death are outrageous, and there is plenty of liability, but liability does not belong primarily to those officers who arrived at her residence, and whose actions were trained and directed by others. For the officers in these incidents there is legitimate application of immunity.

SCOTUS can and must fix the mess it created.

This is not hard. When civil rights are violated, restitution is due. Someone is responsible. Who is...? Think about it.

Justice for civil rights violations must be restored. It is time to reign in the expansive Qualified Immunity Era.