“All new ideas begin in a non-conforming mind that questions some tenet of the conventional wisdom.”  - Admiral Hyman Rickover 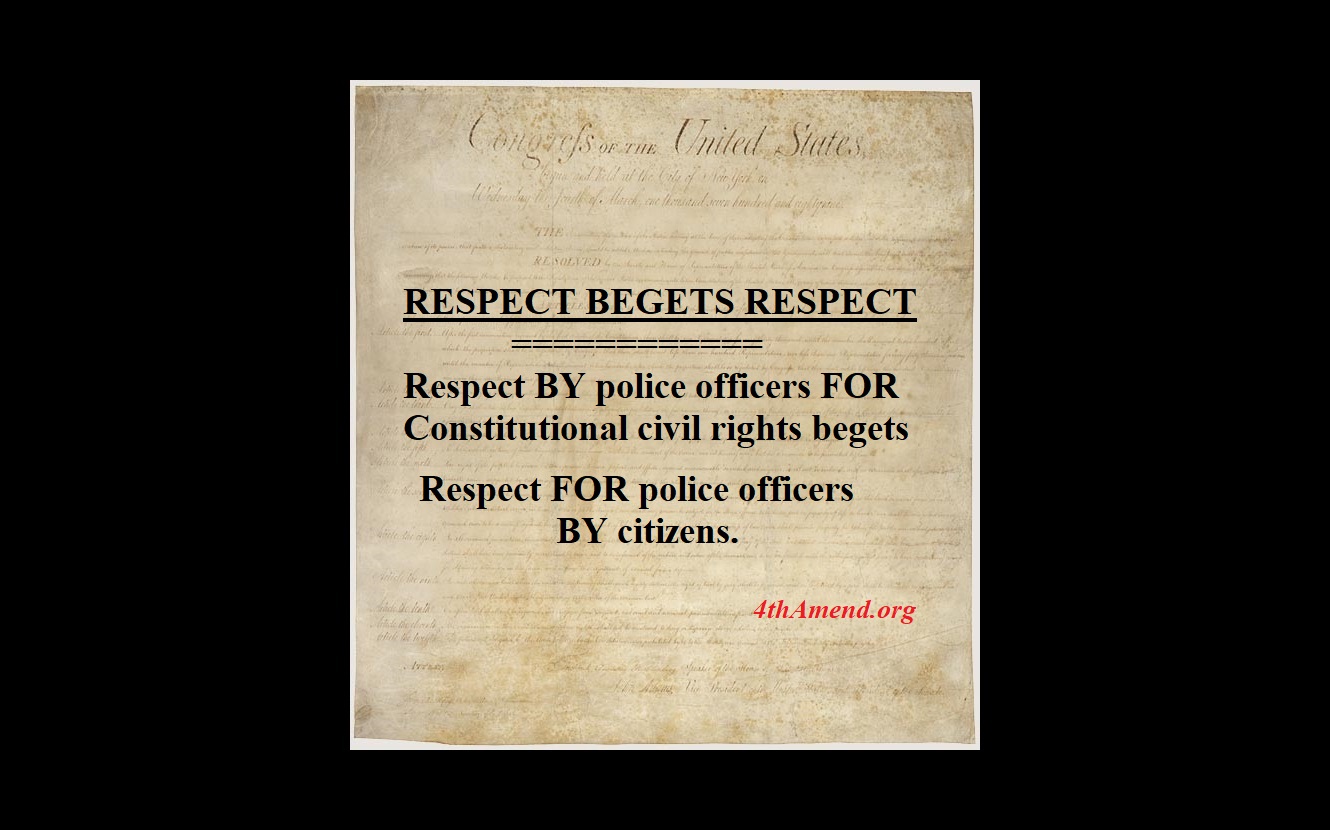 Reality: Any civil society that includes imperfect humans requires some structure to protect "life, liberty and the pursuit of happiness". The entirety of human history has developed the structures we call laws, policing, courts and jails. The challenge has always been designing the rules and enforcement to create peace and harmony in society that respects the freedom of individuals.  Fairness. And most of the time it works.

Yet there are cases where we must admit that the status quo has failed and rights have been violated. Most of the structures of policing lend themselves to abuse when officers think, "just restrain and arrest citizens and get them to the station, the prosecutor can negotiate something from there". That mentality fails to start with respect for the civil right of citizens written into the US Constitution's Bill of Rights. And the Constitution supersedes all other laws an officer might enforce. And defending Constitutional civil rights must be the first priority of our federal courts.

America must restore civil rights to have harmony on our streets. We are in favor of discussing and vetting all ideas for that, and below are some that we like.

Understand that change in policing is NOT needed for the majority of interactions between citizens and officers. And good officers who do the job with respect for civil rights are to be applauded. 700,000+ officers process 10,000,000 arrests, the vast majority of those safely and without incident and in compliance with law. Change is needed because a few cases of abuse of police powers have resulted in rights violations that are outrageous and unacceptable, and the damage done to the life of citizens is always permanent. Good citizens cannot tolerate violations of civil rights, nor can good officers.

1) In the Internet era, when arrest reports are a matter of public record, effecting licenses, insurance rates, and a citizen's reputation with everyone from employers to personal relationships, there must be accountability in the truthfulness of those reports, which means penalties for felony perjury must be pursued by a truly independent prosecutor at every time an officer's report is not truly objective and factual and respectful of civil rights.

2) Since arrest is so damaging (lost time, cost of hiring a lawyer to deal with legal processes, etc.) and since arrest reports are public records, there must be an opportunity for citizens to post rebuttal reports alongside an officer's report to rebut or correct errors or "creative writing" whenever it appears. Officers have already published a story and "tainted the jury pool", so fairness dictates that both sides of a story must be able to be told.

3) Since officers are selected, vetted, trained and armed, and have significant powers, periodic reporting of activity of each officer must be available to the public to show accountability for the work officers perform to "protect and serve", which should include an annual accounting of interactions with citizens, and disposition of those interactions. In that way, patterns can be identified and abuses of power can be known. All reports alleging abuse of powers must be public record, just as every officer's reports alleging crimes are public record. Fairness. Balance.

4) Every police officer is trained in the law and armed and has police powers. When those powers are abused, whether willfully, negligently or maliciously, that can inflict serious damage on the lives of citizens. So, like other professional careers in the modern era, all officers must carry indemnity insurance to protect both citizens and officers in the event of a civil rights violation. This must be a minimum of $1M in coverage, since officers have occasion to interact with accomplished citizens in every district. An officer making an arrest does not incur any cost, and time spent is "part of the job". Yet each arrest forcibly takes from citizens time and money. Time can never be recovered. For some citizens, lost time can inflict serious damage to businesses and careers, and can disrupt many other lives at enormous cost. The cost of attorney fees, court costs, depositions and other expenses can easily be $3,000- to $20,000+, depending upon the circumstances. To seek justice and file a lawsuit over a violation of civil rights can cost $50,000- to $100,000+. And citizens have to pay all of this out of pocket. The battle for truth and justice is unfair. An indemnity policy serves several purposes:

i) It provides a financial reserve for compensating individuals whose rights have been violated. No longer does the Supreme Court of the United States (SCOTUS) need to pretend that it is weighing the financial decimation of an officer against providing restitution for a clear rights violation (often with video). So SCOTUS no longer needs to tip the scales of justice and pretend that a civil rights violation matters less than the officer's career and financial standing. SCOTUS can be honest and again decree, regarding civil rights, that "a violation is a violation, and violations deserve restitution".

ii) Officers are protected against financial loss. With indemnity policies protecting officers, everyone can be honest about whether a civil rights violation occurred and restitution can be fairly considered.

iii) Individually purchased policies allow for good actors to be rewarded with lower rates, and bad actors to be rated up or cancelled, just like auto insurance policies. Taxpayers, cities and entire departments are not penalized for bad actors. However, carriers would be able to rate up consistently poor training at particular law enforcement academies, or departments that demonstrate a pattern of disrespect for civil rights.

iv) Insurance industry databases will allow patterns to be identified and corrected where necessary. Bad actors and bullies will quickly become uninsurable, self-eliminating risk from the profession if they cannot secure a policy. Departments with good training protocols and respect for citizens will get better rates. The professional insurance industry will replace thousands of buried "confidential settlements" that are currently hidden in municipal budgets.

v) Police unions and departments no longer need to defend the indefensible, or compel lawyers to lie to courts about rights violations.

7) Every minute that an officer wears a badge and wields "police powers" must be recorded by body camera audio and video. Cameras that require activation by the officer, or that can be turned off by officers, or that only activate a few seconds of "look back" after being activated by police lights or gunfire are unacceptable. And it must be archived and retained. Digital storage is cheap and compact, so there is no logical reason to not do this. It is easy to archive the file to allow twelve month storage for annual reviews, litigation, retraining, and other needs. With police powers comes responsibility and accountability to the citizens who permit those powers and who pay for those officers, their training, their equipment, etc. Full disclosure provides accountability. Granted, most of the time video will show good police work, which can be evidence in cases. In rare incidents it can be helpful to citizens, and it can help identify officers who have not yet made a good career choice.

8) Activity quotas, a vestige of an era when there was no good way to monitor whether an officer was actually working, must end. Cameras and other technology serve that purpose today. Quotas were simply measures to ensure activity into the prosecutor's office, so more jobs could be created...at taxpayer expense. Quotas put officers in the untenable position of choosing between fulfilling the quota and violating civil rights of American citizens.

Every officer who respects civil rights, and whose conduct is lawful, accepts accountability for the use of police powers because good officers understand the damage done to citizens and their families by civil rights violations.

An annual accounting of the handling and disposition of cases brought to a prosecutor must be available to the public, so that trends in policing and case disposition by a prosecutor can be readily observed. Best practices can be shared. When data elements that should be analyzed are gathered and compared, regions where policing is repressive can easily be identified and corrected, as can trends in prosecution. Good leaders in policing and prosecution can be identified, driving good appointments and elections. Data drives good decisions.

It is also time to end the sham of pretending that officers and/or prosecutors are credible to assess moods and/or manage counseling. There is a high level of malpractice when officers use code words like "angry" in arrest reports, without taking any time at the scene to determine a citizen's character. And an even higher level of malpractice is involved when a prosecutor relies upon a written claim by an untrained officer and then acts on that claim. Simply because the word "angry" is used by an untrained police officer, prosecutors demand that "anger management counseling" be scheduled and paid by citizens in coercive plea bargains. Prosecutors must acknowledge that no citizen skips and sings while being arrested, so discontent and resistance to arrest is normal. This sham of required counseling is an insidious and incestuous system, especially corrupt where counselors make campaign contributions.

Available indemnity insurance to protect both citizens and officers completely undermines the reasons for qualified immunity and all of its derivative judicial fabrications designed to deny the primacy of those civil rights, and deny restitution to citizens when it is due. Indemnity insurance will allow courts to be honest about what everyone else knows, and about what is plainly visible on video. The rights of citizens can be restored and again can be protected by the courts, which courts must be the protectors of those rights when they are violated.

Only justice in our courts will provide citizens safety on our streets.

Civil rights lawyers have to evolve thinking about cases. When rights are violated, did the officer act of his/her own volition using free will? Or were those actions trained at a particular academy, or urged by a department trainer or supervisor? In trained, then the concept that the "principal is responsible for the actions of the agent" requires naming that law enforcement academy or department trainer or supervisor as an additional defendant.

If rights are violated, then there is a responsible party.

A violation is a violation, and when rights are violated, restitution is due.

Once civil rights are respected and protected, municipal budgets will find relief. Officers will be forced to stop using the mentality, "just attack, arrest and accuse, and let the prosecutors haggle a deal". Officers will be required to stop "fabricating crimes". Prosecutor office staffs can be reduced to the level appropriate to deal with "actual crime" for which a trial is necessary, and for which jail is necessary to keep a community safe. A lot of busywork and paperwork and burdens both on municipal budgets and upon citizens can be eliminated.

These are a few ideas. Bright, thoughtful and engaged citizens will have other ideas about how to have a civil society of laws that respects the rights of citizens written by our Founding Fathers into the US Constitution. Let's explore them and chart a better course forward where officers and citizens can live in harmony and all enjoy "life, liberty and the pursuit of happiness"...